Tyranny of the majority: Is secession a justified response?

From Colorado counties proposing secession to Crimea voting to break-away from Ukraine; and from Venice adopting unofficial independence status to Scotland wanting to dissolve the 307 year-old marriage with England – Who’d have thought we are living in an age of social contract renewal?

Over the past four months – majorities in 5 out of 11 counties voted to become the 51st US State; an

unbelievable 96% of Crimeans voted to join Russia; 89% of Venetians voted to create independent city-state within Italy; and in September Scottish voters will take to the polls to decide whether to become a free and independent country.

Opponents of these secessionist movements have quickly taken to the bully pulpit to point out the unconstitutionality of these votes. What if it’s illegal to vote for smaller regions, such as a county, to secede from lager entities, such as states or nations? Does a law make separatists feelings “go-away”?

Secessionist ideas do not begin at the ballot box or in a parliamentary chamber. The ideas of dissolving the bands that tie one region to another begin with disaccord and minority dissatisfaction – tyranny of the majority. Where one political party dominates and punishes the opposition or one geo-cultural group forces its views onto another.

Under the US Constitution, no mention is made of an acceptable dissolution of the union. The Civil War and the Supreme Court’s decision in Texas v. White (1869) arguably established the Constitution ordained a perpetual and indissoluble union.

In 1776, when the founders declared independence from the United Kingdom, that act was in violation of the British Constitution’s supremacy of parliament. If there had been any doubt of Parliament’s authority, The Declaratory Act of 1766, which asserted the right of Parliament to legislate for the colonies "in all cases whatsoever," would have settled the question.

To consider our founders revolutionaries seems abhorrent. The situation was an impasse, Parliament told the colonists to ‘go pound sand’ and the colonists responded by crafting a legal justification based on social contract theory, tyranny of the majority, and natural law.

As for the Colorado counties wanting to follow the West Virginia Model, that dream ended when the 69th Colorado General Assembly adjourned on May 7th.

Under Article 4 §3 of the US Constitution, no new state can be created from within an existing state without the consent of both the state’s general assembly and Congress.

Without the Colorado legislature taking action, our state will remain intact. Remaining united is not to say the dissatisfaction with the Democrats who control the governor’s office and legislature has gone away.

Similar to Colorado, the Crimea and Venice referendums were a protest to majority tyrannizing the minority. Unlike Colorado, Crimea’s vote was unconstitutional. Venice’s ballot was unofficial.

The Ukrainian Constitution specifically states in Article 73: “Alterations to the territory of Ukraine shall be resolved exclusively by the All-Ukrainian referendum.”

Many have argued the Crimea referendum was illegal according to Public International Law.

Firstly, under the Montevideo Convention on the Rights and Duties of States (1933), four requires must be satisfied to be considered an independent nation: permanent population, a defined territory, a government, and the capacity to enter into diplomatic relations.

Secondly, a country must be recognised by another country.

The Crimean referendum asked voters whether they wanted to join Russia as a federal subject or restore the 1992 Crimean Constitution which granted greater authority to the regional parliament. With 83% voter turn-out, 96% voted in-favor of joining Russia. This act was certainly illegal under the Ukrainian Constitution, but as for International law, the jury is still out.

The Venice ballot asked voter whether they wanted to secede from Italy and become and independent city-state. With 65% of the region voting, a whopping 89% or 2.1 million people voted in-favor of breaking away from Rome! The Italian Government had no fear of Venice actually breaking away, as the referendum had been unofficial.

Much like rural Colorado having difficult with Denver listening; Crimea has a Kiev problem; Venice a Rome problem; and Scotland, an English problem.

On September 18th, Scots will take to the polls to decide their fate. Legally, Scotland has the same problem the American Colonists had with the British Constitution, namely the supremacy of parliament.

The UK Parliament in London has the ability to enact or resend any legislation, including the grant of independence. The Edinburgh Agreement, merely a gentleman’s handshake, is where the UK Parliament has pre-agreed to acquiesce to the outcome of the referendum.

While the votes remain to be cast, one thing is certain, laws banning secession don’t make secessionist ideas go away. Revolution and civil war should be avoided. Elections, whether official or unofficial; lawful or unlawful should be a wake-up call to majority-leaders who are unwilling to respect the ideologies, customs, or traditions of minority constituencies.

Life Across the Pond: perspectives by Matthew Soper

Matt Soper, BA, LLM, LLB, LLM
Author Matthew Soper shares his philosophy, opinions, scholarly writings, and adventurous anecdotes from reading law at The University of Edinburgh's Faculty of Law in Scotland & the University of New Hampshire's Franklin Pierce School of Law to serving as a member of the Colorado House of Representatives. 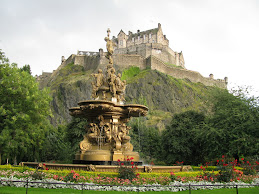 Princes Street Gardens with Edinburgh Castle in the background